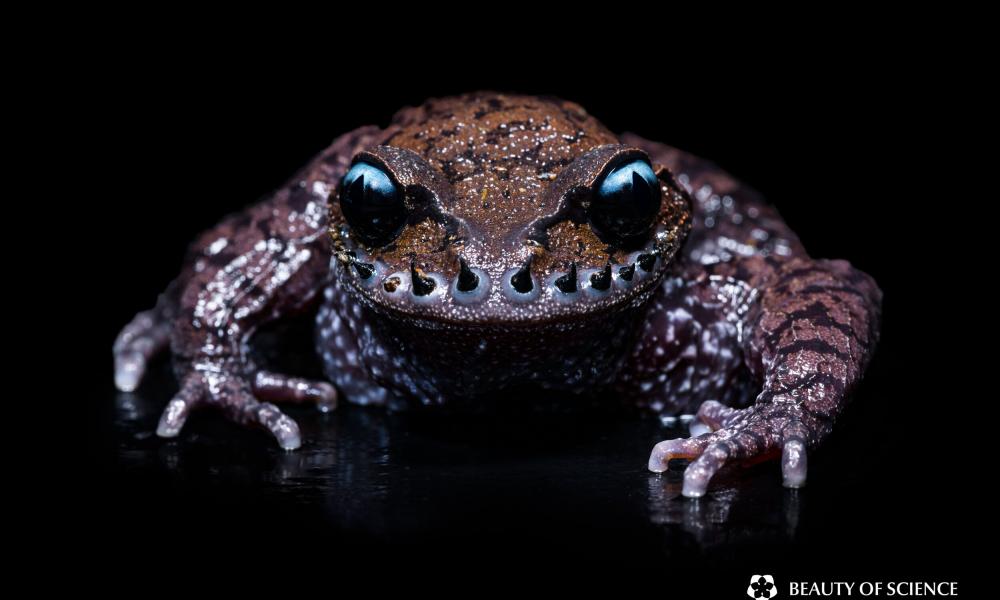 Antimicrobial peptides (AMPs) are a promising alternative to conventional antibiotics that could save us from the looming global health crisis related to antibiotic resistance. A new publication from the lab of GSC’s Distinguished Scientist, Dr. Inanç Birol, presents a bioinformatics pipeline for high throughput identification of AMPs in RNA sequencing datasets from 75 amphibian and insect species.

AMPs are short protein fragments (about five to 50 amino acids long) naturally produced by all multicellular organisms. Part of the immune system, AMPs are effective at combating a pathogens such as bacteria, fungi, parasites and viruses. Since they operate through many different mechanisms, AMPs have a broad spectrum of efficiency and pathogens develop resistance to them at a slow rate compared to conventional antibiotics.

Amphibians such as the American bullfrog produce a wide variety of AMPs, likely because of their exposure to a multitude of pathogens both in water and on land. Research in Dr. Birol’s lab is focused on finding AMPs in the long stretches of RNA—which provides the code (or recipe) for these peptides to be made—within the transcriptome of amphibians and insects.

A publication in the journal Antibiotics reports on the use of rAMPage to analyze RNA sequence datasets from 38 amphibian and 37 insect species. The study discovered 1137 possible AMPs, 1024 of which were not been previously described.

Twenty-one of these AMPs were exposed to bacteria to further to assess their potential effectiveness against pathogens. Seven showed antimicrobial activity with minimal toxicity. One AMP stood out as being particularly promising due to its novelty and bioactivity.

In terms of next steps, the first author of the paper, Diana Lin, says, “Here we report seven out of twenty one thus far tested putative AMPs to be active against E. coli and S. aureus. I'd like to see how the next set of 67 putative AMPs perform against this panel. Additionally, for the seven active AMPs, I'd like to see them tested against a wider panel of pathogens, including multi-drug resistant isolates.”

With seven promising AMPs identified and over 1000 left to investigate, this study demonstrates the potential of rAMPage to accelerate the discovery of novel antibiotics. Because progress is rapid in bioinformatics, rAMPage is designed to be flexible as new technologies are developed.

“In this paper, we ran rAMPage on datasets originating from 75 species of frogs, toads, ants, bees, and wasps,” says Lin. “There are many other public datasets available in the taxonomic class of amphibians and insects. For example, AMP discovery in persistent pests such as cockroaches, ticks, bedbugs, and mosquitos appear promising.”

The study authors warn that despite the great promise provided by rAMPage, AMP-based drug development still faces some biological challenges, such as peptide stability and bacterial resistance. Targeted AMP discovery methods are currently in development to find solutions to these challenges.

“rAMPage has the potential to discover AMPs produced by amphibians and insects suitable for drug development in the race against antibiotic resistance,” says Lin when asked about the significance of the study. “Once AMPs discovered by rAMPage have been validated in vitro to be effective against WHO priority pathogens, deeper clinical investigation can begin.”

Learn more about AMP function and their potential use as a targeted treatment for cancer in the GSC news story Uncovering antibiotics and cancer drugs in bullfrog DNA.

This work funded by Genome Canada, Genome BC, the Canadian Agricultural Partnership, and further supported by the Investment Agriculture Foundation of BC and the Office of the Vice President, Research and Innovation of the University of British Columbia. rAMPage is based on a prototype pipeline created by S. Austin Hammond and is publicly available on github.

Images of the Emei Mustache Toad and Omei Tree Frog obtained from Beauty of Science.