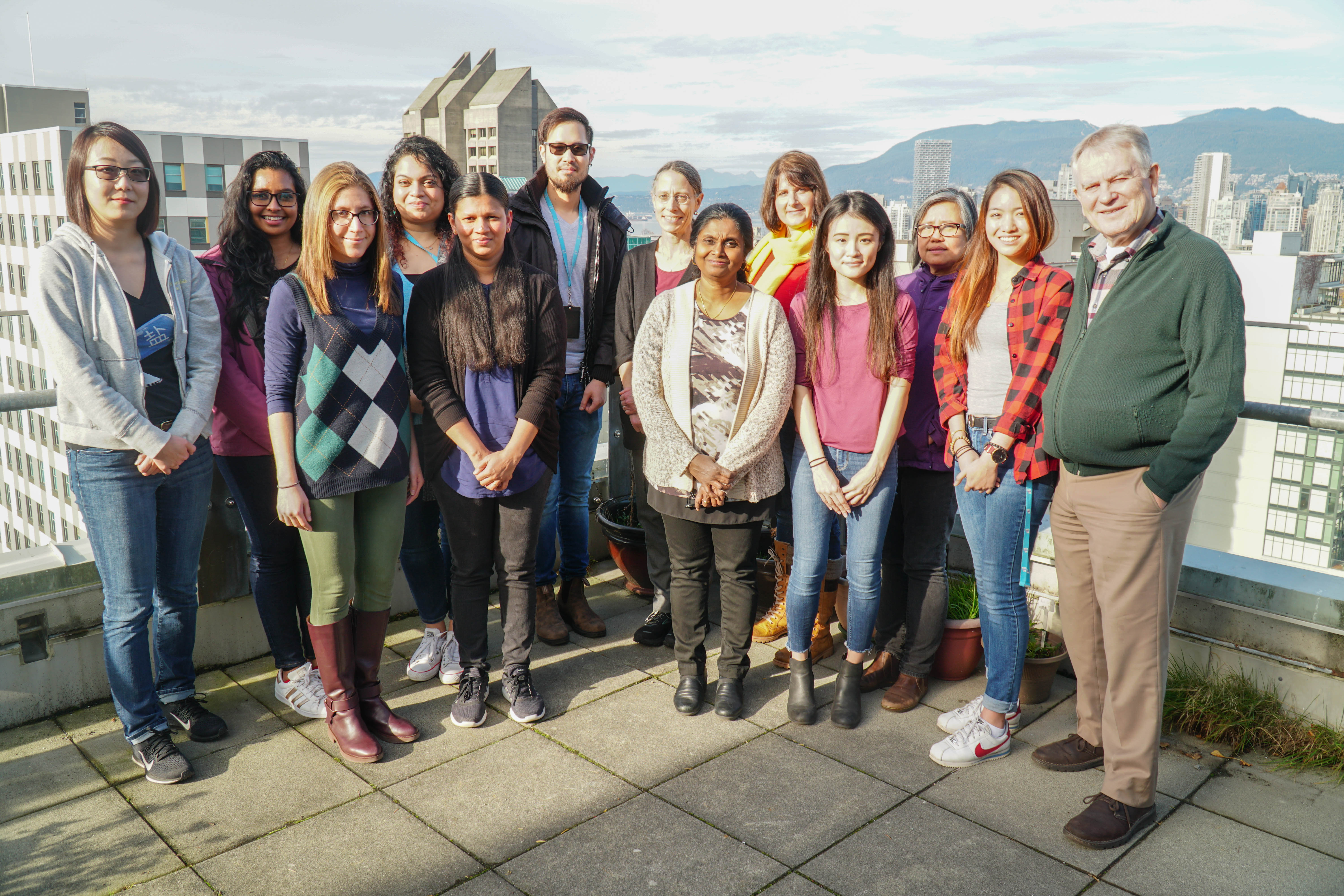 Autophagy is an intracellular recycling process that promotes homeostasis, stress adaptation and cell survival. The autophagy process provides nutrients and energy through lysosomal degradation of cytoplasmic components engulfed in double membrane-bound vesicles known as autophagosomes. Autophagy occurs at basal rates in virtually all eukaryotic cells to fulfill homeostatic functions such as the recycling of long-lived proteins and damaged organelles. In this way, autophagy acts to safeguard genome integrity and suppress tumorigenesis. Under cellular stress conditions, autophagy is upregulated as an adaptive survival response. Cancer cells may exploit elevated autophagy to survive low nutrient conditions, fuel proliferation, and escape the effects of chemotherapy and other treatments.

Consequently, autophagy is under investigation as a target for anticancer therapy in preclinical studies and clinical trials. However, our understanding of the mechanisms by which cells utilize the autophagy pathway to promote both normal development and cancer progression is limited.

To help elucidate these mechanisms, the overall goals of my research program are to identify and characterize regulators of autophagy, investigate the roles of autophagy during normal development and cancer progression, and evaluate the therapeutic potential of autophagy modulation for cancer treatment.

The Gorski laboratory is investigating the clinical relevance, therapeutic potential, and regulation of ATG4B in the context of HER2-positive breast cancer.

The overall objective of this study is to investigate the biological roles and therapeutic target potential of all four ATG4 family proteins in pancreatic cancer.

Roles of macroautophagy in Drosophila development

The goal of Dr. Gorski’s lab in carrying out this research is to increase our understanding of the regulation and functions of autophagy as part of the normal development processes in an easily studied model organism.

Autophagy and its interplay with cellular stress response pathways.

Dr. Gorski's laboratory is investigating the functional relationships and coordinated regulation between the autophagy pathway and extracellular vesicles.

By integrating RNA-sequencing based transcriptome profiling and an innovative new technology for proteomic profiling of tumour specimens, this study will explore the proteogenomic landscape of Pancreatic neuroendocrine tumours (PNETs)

RNA-sequencing and quantitative proteomic profiling simultaneously measure thousands of molecules and provide opportunities to decipher the transcriptomic and proteomic landscapes of cohort specimens for basic and health research. We present a protocol for the analysis of paired transcriptome and proteome data to identify and compare molecular subgroups among cohort specimens. We demonstrate a streamlined analysis workflow, applicable for both transcriptome and proteome data, which allows the comparison of two data types for RNA-protein variations and for derivation of biological implications.

Unlocking the gate to GABARAPL2

GABARAPL2 was initially characterized for its involvement in protein transport and membrane fusion events, but has since gained notoriety for its role in autophagy. GABARAPL2 is frequently studied alongside its GABARAP subfamily members, GABARAP and GABARAPL1. Although functional redundancy exists among the subfamily members, a complex network of molecular interactions, physiological processes and pathologies can be primarily related to GABARAPL2. GABARAPL2 has a multifaceted role, ranging from cellular differentiation to intracellular degradation. Much of what we know about GABARAPL2 is gained through identifying its interacting partners-a list that is constantly growing. In this article, we review both the autophagy-dependent and autophagy-independent roles of GABARAPL2, and emphasize their implications for both health and disease.

Chloroquine (CQ), a lysosomotropic agent, is commonly used to inhibit lysosomal degradation and macroautophagy/autophagy. Here we investigated the cell-extrinsic effects of CQ on secretion. We showed that lysosomal and autophagy inhibition by CQ altered the secretome, and induced the release of Atg8 orthologs and autophagy receptors. Atg8-family proteins, in particular, were secreted inside small extracellular vesicles (sEVs) in a lipidation-dependent manner. CQ treatment enhanced the release of Atg8-family proteins inside sEVs. Using full-length ATG16L1 and an ATG16L1 mutant that enables Atg8-family protein lipidation on double but not on single membranes, we demonstrated that LC3B is released in two distinct sEV populations: one enriched with SDCBP/Syntenin-1, CD63, and endosomal lipidated LC3B, and another that contains LC3B but is not enriched with SDCBP/Syntenin-1 or CD63, and which our data supports as originating from a double-membrane source. Our findings underscore the context-dependency of sEV heterogeneity and composition, and illustrate the integration of autophagy and sEV composition in response to lysosomal inhibition.

Cancers, 2019
Ho, Cally J, Gorski, Sharon M
Despite advances in diagnostic tools and therapeutic options, treatment resistance remains a challenge for many cancer patients. Recent studies have found evidence that autophagy, a cellular pathway that delivers cytoplasmic components to lysosomes for degradation and recycling, contributes to treatment resistance in different cancer types. A role for autophagy in resistance to chemotherapies and targeted therapies has been described based largely on associations with various signaling pathways, including MAPK and PI3K/AKT signaling. However, our current understanding of the molecular mechanisms underlying the role of autophagy in facilitating treatment resistance remains limited. Here we provide a comprehensive summary of the evidence linking autophagy to major signaling pathways in the context of treatment resistance and tumor progression, and then highlight recently emerged molecular mechanisms underlying autophagy and the p62/KEAP1/NRF2 and FOXO3A/PUMA axes in chemoresistance.

Diverse mechanisms of autophagy dysregulation and their therapeutic implications: does the shoe fit?

The interplay between exosomes and autophagy - partners in crime.

Journal of cell science, 2018
Xu, Jing, Camfield, Robert, Gorski, Sharon M
The eukaryotic endomembrane system is a complex series of interconnected membranous organelles that play important roles in responding to stress and maintaining cell homeostasis during health and disease. Two components of this system, exosome biogenesis and autophagy, are linked by the endolysosomal pathway. Exosomes are cargo-laden extracellular vesicles that arise from endosome-derived multivesicular bodies, and autophagy is a lysosomal-dependent degradation and recycling pathway. Recent studies have revealed shared molecular machinery between exosome biogenesis and autophagy, as well as substantial crosstalk between these two processes. In this Review, we first describe the classic view of exosome biogenesis and autophagy, including their links to the endolysosomal pathway. We then present the evidence for autophagy-related proteins in exosome biogenesis, the emerging roles of amphisomes and the evolving models of exosome-autophagy pathway interactions. Finally, we discuss the implications of exosome and autophagy interplay in the context of neurodegeneration and cancer.

Evolution of tools and methods for monitoring autophagic flux in mammalian cells.

Biochemical Society transactions, 2018
Yang, Kevin C, Sathiyaseelan, Paalini, Ho, Cally, Gorski, Sharon M
Autophagy is an evolutionarily conserved lysosome-mediated degradation and recycling process, which functions in cellular homeostasis and stress adaptation. The process is highly dynamic and involves autophagosome synthesis, cargo recognition and transport, autophagosome-lysosome fusion, and cargo degradation. The multistep nature of autophagy makes it challenging to quantify, and it is important to consider not only the number of autophagosomes within a cell but also the autophagic degradative activity. The rate at which cargos are recognized, segregated, and degraded through the autophagy pathway is defined as autophagic flux. In practice, methods to measure autophagic flux typically evaluate the lysosome-mediated cargo degradation step by leveraging known autophagy markers such as MAP1LC3B (microtubule-associated proteins 1A/1B light chain 3 beta) or lysosome-dependent fluorescent agents. In this review, we summarize the tools and methods used in mammalian cultured cells pertaining to these two approaches, and highlight innovations that have led to their evolution in recent years. We also discuss the potential limitations of these approaches and recommend using a combination of strategies and multiple different autophagy markers to reliably evaluate autophagic flux in mammalian cells.

Autophagy, 2017
Choutka, Courtney, DeVorkin, Lindsay, Go, Nancy Erro, Hou, Ying-Chen Claire, Moradian, Annie, Morin, Gregg B, Gorski, Sharon M
The 2 main degradative pathways that contribute to proteostasis are the ubiquitin-proteasome system and autophagy but how they are molecularly coordinated is not well understood. Here, we demonstrate an essential role for an effector caspase in the activation of compensatory autophagy when proteasomal activity is compromised. Functional loss of Hsp83, the Drosophila ortholog of human HSP90 (heat shock protein 90), resulted in reduced proteasomal activity and elevated levels of the effector caspase Dcp-1. Surprisingly, genetic analyses showed that the caspase was not required for cell death in this context, but instead was essential for the ensuing compensatory autophagy, female fertility, and organism viability. The zymogen pro-Dcp-1 was found to interact with Hsp83 and undergo proteasomal regulation in an Hsp83-dependent manner. Our work not only reveals unappreciated roles for Hsp83 in proteasomal activity and regulation of Dcp-1, but identifies an effector caspase as a key regulatory factor for sustaining adaptation to cell stress in vivo.

Oncotarget, 2016
Bortnik, Svetlana, Choutka, Courtney, Horlings, Hugo M, Leung, Samuel, Baker, Jennifer H, Lebovitz, Chandra, Dragowska, Wieslawa H, Go, Nancy E, Bally, Marcel B, Minchinton, Andrew I, Gelmon, Karen A, Gorski, Sharon M
Autophagy, a lysosome-mediated degradation and recycling process, functions in advanced malignancies to promote cancer cell survival and contribute to cancer progression and drug resistance. While various autophagy inhibition strategies are under investigation for cancer treatment, corresponding patient selection criteria for these autophagy inhibitors need to be developed. Due to its central roles in the autophagy process, the cysteine protease ATG4B is one of the autophagy proteins being pursued as a potential therapeutic target. In this study, we investigated the expression of ATG4B in breast cancer, a heterogeneous disease comprised of several molecular subtypes. We examined a panel of breast cancer cell lines, xenograft tumors, and breast cancer patient specimens for the protein expression of ATG4B, and found a positive association between HER2 and ATG4B protein expression. We showed that HER2-positive cells, but not HER2-negative breast cancer cells, require ATG4B to survive under stress. In HER2-positive cells, cytoprotective autophagy was dependent on ATG4B under both starvation and HER2 inhibition conditions. Combined knockdown of ATG4B and HER2 by siRNA resulted in a significant decrease in cell viability, and the combination of ATG4B knockdown with trastuzumab resulted in a greater reduction in cell viability compared to trastuzumab treatment alone, in both trastuzumab-sensitive and -resistant HER2 overexpressing breast cancer cells. Together these results demonstrate a novel association of ATG4B positive expression with HER2 positive breast cancers and indicate that this subtype is suitable for emerging ATG4B inhibition strategies.

The Journal of cell biology, 2014
DeVorkin, Lindsay, Go, Nancy Erro, Hou, Ying-Chen Claire, Moradian, Annie, Morin, Gregg B, Gorski, Sharon M
Increasing evidence reveals that a subset of proteins participates in both the autophagy and apoptosis pathways, and this intersection is important in normal physiological contexts and in pathological settings. In this paper, we show that the Drosophila effector caspase, Drosophila caspase 1 (Dcp-1), localizes within mitochondria and regulates mitochondrial morphology and autophagic flux. Loss of Dcp-1 led to mitochondrial elongation, increased levels of the mitochondrial adenine nucleotide translocase stress-sensitive B (SesB), increased adenosine triphosphate (ATP), and a reduction in autophagic flux. Moreover, we find that SesB suppresses autophagic flux during midoogenesis, identifying a novel negative regulator of autophagy. Reduced SesB activity or depletion of ATP by oligomycin A could rescue the autophagic defect in Dcp-1 loss-of-function flies, demonstrating that Dcp-1 promotes autophagy by negatively regulating SesB and ATP levels. Furthermore, we find that pro-Dcp-1 interacts with SesB in a nonproteolytic manner to regulate its stability. These data reveal a new mitochondrial-associated molecular link between nonapoptotic caspase function and autophagy regulation in vivo.