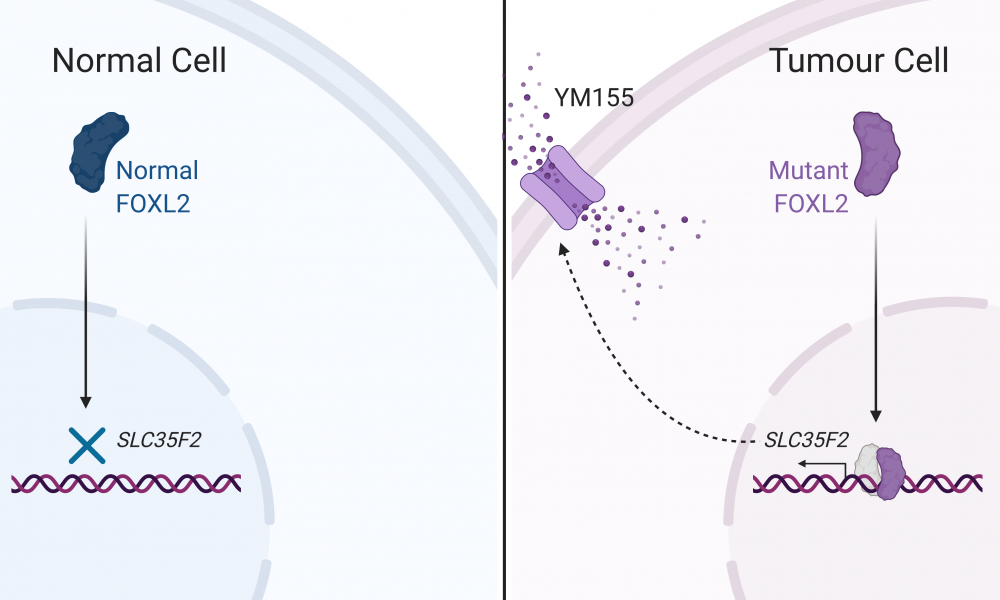 A mutation in a transcription factor essential for ovary development is commonly used as a diagnostic marker for a type of ovarian cancer, but little is known about how it effects the tumour cell itself. Extensive analysis of how this mutation alters DNA binding has revealed the potential for a novel treatment strategy.

Ovarian cancer, the fifth most common cause of cancer death in Canadian women, has several subtypes, one of which is Adult Granulosa Cell Tumours (AGCT), the subtype accounting for two to five per cent of ovarian cancer cases.

In 2009, in a landmark study published in The New England Journal of Medicine, BC Cancer’s Dr. David Huntsman collaborated with researchers at the GSC to discover a specific mutation that has now become a hallmark of AGCT. The mutation—denoted as C143A—occurs within the gene that codes for the transcription factor FOXL2. In a normal ovary cell, FOXL2 binds to DNA and regulates expression of genes involved in ovary development, but the C134W mutation leads to perturbations to the production of steroid biomolecules, and promotes cell death and proliferation signalling pathways believed to result in cancer development and progression. Until now, however, the molecular mechanisms behind these effects had remained unresolved.

Building upon their previous discoveries in a study published in Cancer Research, co-led by GSC Senior Scientists Drs. Martin Hirst and Gregg Morin, in collaboration with fellow BC Cancer scientist Dr. David Huntsman, researchers used chromatin immunoprecipitation sequencing (CHiP-Seq) and RNA sequencing to catalog the DNA binding characteristics of the mutated form of FOXL2. To do this, they engineered cells in the laboratory that express either the normal version of FOXL2, or the C134W mutant form at the same levels found in patient tumour cell lines.

Their analysis revealed that the mutant form of the FOXL2 protein retains its ability to bind to 80 per cent of its normal DNA binding sites; however, strikingly, it was also able to bind to a completely unique set of genomic regions. Among these was the promoter region of the gene SLC35F2, which codes for a transporter protein that allows for the movement of molecules in and out of the cell.

The SLC35F2 transport protein has been previously shown to sensitize cells to YM155, an anti-cancer compound currently in clinical trials, by allowing the compound to enter the cell. Given the observation that the mutated version of FOXL2 appears to regulate expression of this transport protein, the researchers postulated that the mutation may be an “Achilles Heel” for the disease by contributing to disease formation and progression, but also making it vulnerable to YM155 treatment.

The scientists treated their engineered cells with YM155 and found that the cells expressing the mutated form of FOXL2 were more sensitive to the drug than normal cells. These findings suggest that YM155 may be an effective therapeutic option for the treatment of AGCTs.

In addition to uncovering a potential novel treatment option for the women with AGCTs, this study provides an extensive catalog of DNA binding alterations that occur following mutation to FOXL2 and will facilitate further exploration of the molecular characteristics of the disease.

This study was funded by the Terry Fox Research Institute and Canadian Foundation for Innovation, with support from WestGrid and Compute Canada. The GSC’s technology platform provided the sequencing and computational resources needed for analysis.