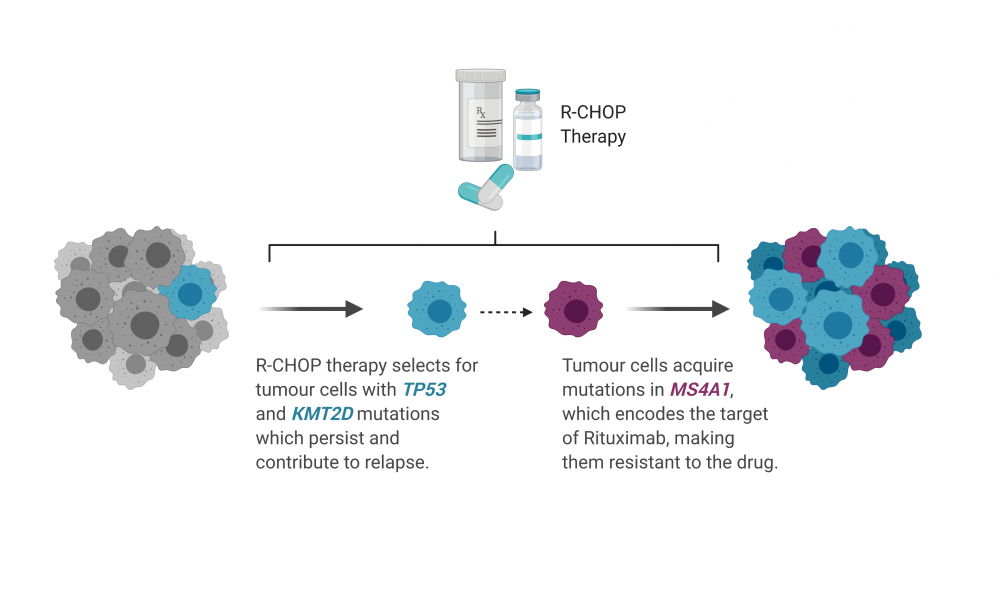 When treatment with frontline therapeutics fails for patients with diffuse large B cell lymphoma (DLBCL), prognosis is very poor. By sequencing tumour DNA from patients with relapsed disease, researchers have now uncovered genetic mutations that contribute to treatment failure and resistance, paving the way to better treatment strategies.

DLBCL is a fast-growing cancer and is the most common type of non-Hodgkin lymphoma. The standard frontline treatment for DLBCL is called R-CHOP, where each letter stands for a different drug and the “R” stands for rituximab, an antibody which targets a surface protein on B cells. R-CHOP is curative for 60-70 per cent of cases, but for patients who either don’t respond to treatment or develop resistance, few alternative treatment options exist and survival rates are low.

The study took advantage of liquid biopsies, where tumour DNA is isolated directly from the blood (called circulating tumour DNA, ctDNA) rather than from a more invasive tumour biopsy, to monitor disease progression following treatment with R-CHOP. From the 63 genes they analyzed, the team identified six genes in which mutations could contribute to R-CHOP failure and resistance.

Two of these genes, TP53 and KMT2D, were found to be more commonly mutated in treatment-resistant DLBCL patients at the time of diagnosis. In many patients, mutations in these genes were found in all cells in the tumour at diagnosis and persisted after treatment suggesting that these mutations, along with others, could confer resistance to therapy.

“These mutations tended to be present in the tumour at diagnosis and persisted at relapse, which indicates that these could actually contribute to intrinsic tumour resistance, where the tumour is already resistant to the therapy before even being treated,” says Christopher Rushton, a graduate student in Dr. Morin’s group and co-first author on the study.

On the other hand, mutations in a gene called MS4A1 were rarer in the tumour at the time of diagnosis but became highly abundant in patients with relapsed DLBCL. MS4A1 encodes CD20—the surface protein targeted by rituximab. Through a series of biochemical techniques, the researchers showed that the MS4A1 mutations detected in DLBCL patients prevent the surface expression of CD20, rendering rituximab ineffective. Thus, treatment with R-CHOP was effective at eliminating only the cancer cells not carrying mutations in MS4A1, allowing for the unhindered proliferation of cancer cells with mutations conferring a selective advantage.

“If you are diagnosed with DLBCL almost anywhere in the world, you are treated with R-CHOP. This is one of the first mechanisms that we know of which contributes to rituximab resistance directly,” says Rushton.

The researchers were able to follow one patient, from the time of diagnosis through several courses of treatment, by sequencing ctDNA at various timepoints. Their analyses revealed the startling speed with which resistant cancer cells can proliferate following treatment, in some cases becoming the dominant cell type within just eight days.

“Within eight days you could see a tumour completely change which mutations were dominant based on the treatment that was being given,” says Sarah Arthur, graduate student and co-first author on the study.

“The cancer cells that were enriched and selected for in eight days contained an MS4A1 mutation, which really emphasized that mutations in this gene contribute to acquired treatment resistance in DLBCL,” says Rushton.

This study not only uncovers mechanisms of treatment resistance, but also provides insight into the importance of genetic testing for DLBCL patients and demonstrates how this could be accomplished using minimally invasive analysis of ctDNA from blood samples. Screening for mutations in key genes at the time of diagnosis and throughout treatment with R-CHOP may help clinicians better manage treatment strategies for DLBCL patients.