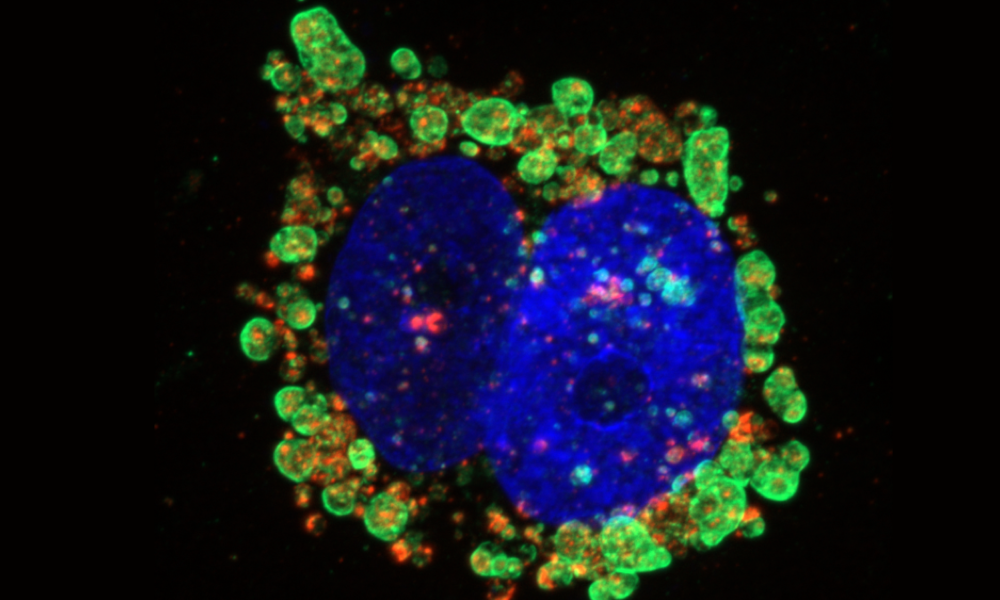 The role of autophagy in recycling debris and supporting cell survival is well known and implicated in cancer development. Other functions of autophagy, including cellular secretion, are less explored. In their most recent study, the GSC’s Gorski Lab sought to assess the impact of lysosomal and, by extension, autophagy inhibition on secretion, and identified new secretory functions of the autophagy machinery.

The canonical function of autophagy involves the breakdown and recycling of cellular debris (e.g., damaged organelles, proteins, etc.). Structures called “autophagosomes” form in the cytoplasm of the cell to collect proteins and organelles. Once mature, autophagosomes fuse with lysosomes to create autolysosomes, and it is within these structures that debris is ultimately broken down for recycling.

Cancer cells are known to upregulate autophagy in order to survive starvation and drug treatment. Studies are underway to investigate whether autophagy inhibition can sensitize cancers to chemotherapy treatment. Among the candidate inhibitors of autophagy, chloroquine (CQ) and hydroxychloroquine (HCQ) are well-tolerated drugs that suppress lysosomal degradation and are currently being evaluated in clinical trials.

Other functions of autophagy

Non-degradative functions of autophagy, and how they contribute to cancer, are only beginning to emerge. Recent research found autophagy participating in other pathways, including immune regulation and secretion.

Cells secrete “capsules”, termed extracellular vesicles (EV), to exchange content and communicate with other cells. Cancer cells in particular, release EV that regulate the local microenvironment and promote metastasis. How autophagy machinery contributes to the secretion of proteins and EV, and how inhibition of autophagy in turn affects secretion, remain unexplored.

Studying the effect of CQ on cellular secretion

The GSC’s Distinguished Scientist Dr. Sharon Gorski and her laboratory recently published their work investigating the impact of autophagy inhibition on small extracellular vesicle (sEV) secretion in the journal Autophagy. In their study, led by Dr. Morgana Xu, they first characterized the secretome—the complete collection of proteins secreted by cells—in the presence and absence of CQ (known to inhibit the lysosome, and thus the degradation function of autophagy).

Working with the GSC’s Head of Proteomics Dr. Gregg Morin’s Lab, the researchers conducted mass spectrometry-based proteomic profiling of the secreted proteins and inferred the cellular pathways involved based on the identities of the proteins. They found that while CQ did not substantially alter the physical profile of secreted particles, it did alter the composition of the secretome.

From their experiments, the researchers identified a family of proteins—called autophagy- related 8 (Atg8)—to be involved in the secretion of specific autophagy proteins in the presence of CQ. They also found that the Atg8-family proteins, in particular, were secreted inside sEVs and that this was enhanced after CQ treatment. Interestingly, the Atg8 proteins were secreted in distinct sEV populations of different intracellular origins. This finding is significant because it implicates autophagy machinery in stress-induced secretion. It also demonstrates that the content of sEVs can change in response to drugs, such as CQ. Hence, sEV composition appears to be context dependent; this raises the possibility that other drugs or stressors could also alter sEV composition and, in turn, function.

This work also shed light on EV heterogeneity, showing that sEV of similar size and density can comprise multiple subpopulations arising from distinct biogenesis sources: in this case, endosomal and autophagosomal compartments. These findings are relevant for future studies examining autophagy in the context of cancer, and the crosstalk between autophagy and EV release.

This research by the Gorski Lab uncovers a new mechanism—the enhanced secretion of autophagy proteins and partitioning of Atg8 proteins into distinct sEV populations in response to CQ—broadly introducing a completely new avenue of autophagy research.

Next, determining the physiological consequences of CQ-induced secretion and how this mechanism is impacted by the likes of autophagy deficiency, cancers and therapies will be paramount.

This study was funded by the Canadian Institutes of Health Research, BC Cancer-Pfizer Innovation Fund and the Research Council of Norway, and made possible through collaboration with multidisciplinary research teams.

Image created with BioRender.com. Thank you to lead author Dr. Morgana Xu for granting us permission to use her fluorescent image of GFP-labelled endosomes for the title image of the story.