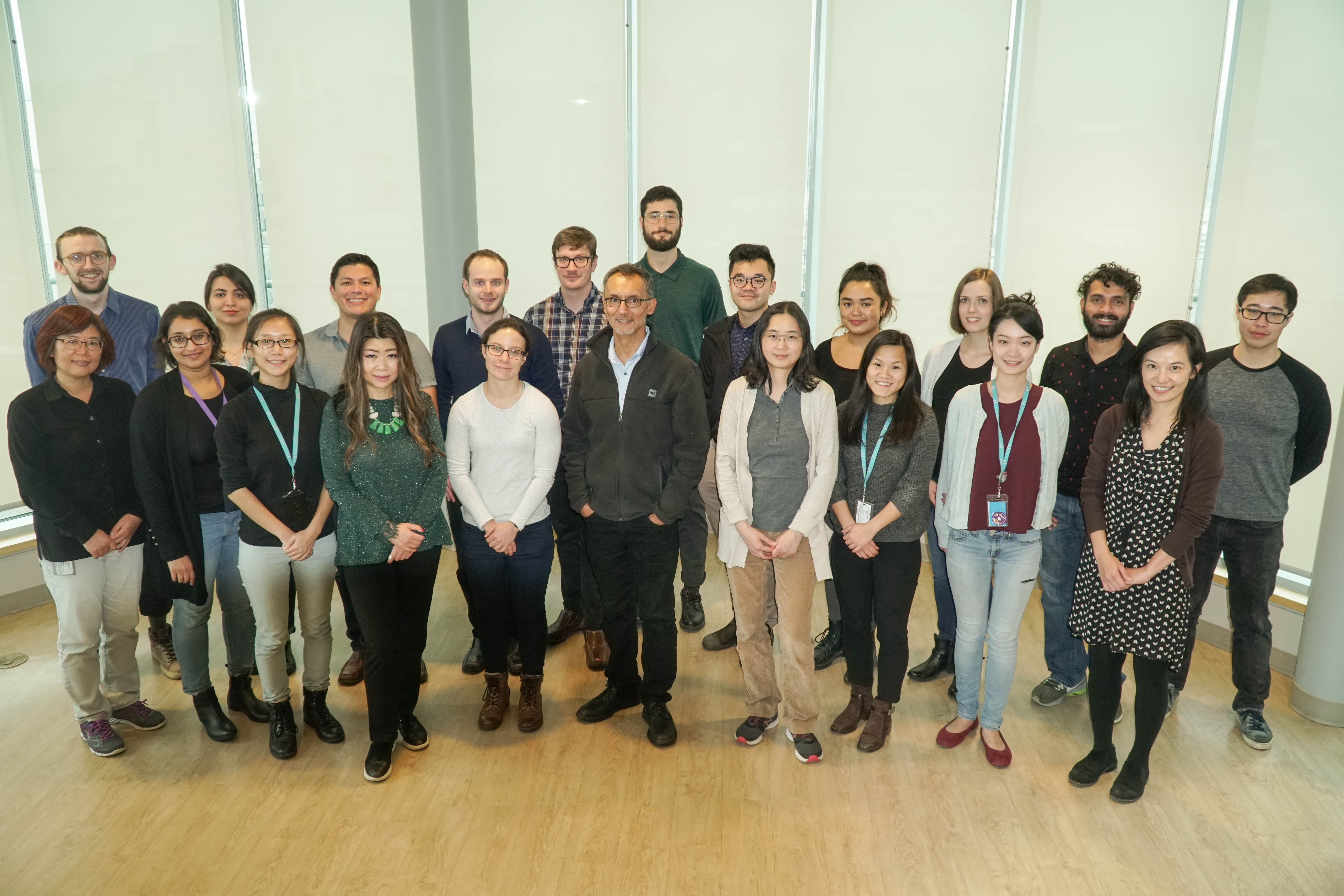 The aim of this project is to streamline the clinical bioinformatics pipeline by creating an automated and modular framework that will reduce training time, reduce reporting turnaround time, facilitate adaptation to new tools and changes to wet lab processes and reduce errors through tracking of information from the entire pipeline.

The aim of this project is to create a single genetic assay that will provide a comprehensive panel of cancer mutations required for both standard therapy and for patients to participate in cancer research.

The aim of this project is to understand the mechanisms of Lenalidomide resistance in Myelodysplastic Syndromes (MDS), as well as to potentially provide strategies to overcome or bypass resistance.

In this project, the Karsan laboratory aims to examine how miR-146a affects blood stem cell aging with a focus on the inflammatory molecules that it regulates in both mouse and human models.

The long term goal of this project is to better understand the difference between normal blood forming cells and leukemic cells. The lab aims to identify and exploit vulnerable disease causing pathways that may be shared across different types of acute leukemias.

The Journal of molecular diagnostics : JMD, 2020
Moore, Richard A, Zeng, Thomas, Docking, T Roderick, Bosdet, Ian, Butterfield, Yaron S, Munro, Sarah, Li, Irene, Swanson, Lucas, Starks, Elizabeth R, Tse, Kane, Mungall, Andrew J, Holt, Robert A, Karsan, Aly
Sample tracking and identity are essential when processing multiple samples in parallel. Sequencing applications often involve high sample numbers, and the data are frequently used in a clinical setting. As such, a simple and accurate intrinsic sample tracking process through a sequencing pipeline is essential. Various solutions have been implemented to verify sample identity, including variant detection at the start and end of the pipeline using arrays or genotyping, bioinformatic comparisons, and optical barcoding of samples. None of these approaches are optimal. To establish a more effective approach using genetic barcoding, we developed a panel of unique DNA sequences cloned into a common vector. A unique DNA sequence is added to the sample when it is first received and can be detected by PCR and/or sequencing at any stage of the process. The control sequences are approximately 200 bases long with low identity to any sequence in the National Center for Biotechnology Information nonredundant database (<30 bases) and contain no long homopolymer (>7) stretches. When a spiked next-generation sequencing library is sequenced, sequence reads derived from this control sequence are generated along with the standard sequencing run and are used to confirm sample identity and determine cross-contamination levels. This approach is used in our targeted clinical diagnostic whole-genome and RNA-sequencing pipelines and is an inexpensive, flexible, and platform-agnostic solution.

Fixation Effects on Variant Calling in a Clinical Resequencing Panel.

International journal of laboratory hematology, 2019
Docking, T Roderick, Karsan, Aly
Clinical genetic testing in the myeloid malignancies is undergoing a rapid transition from the era of cytogenetics and single-gene testing to an era dominated by next-generation sequencing (NGS). This transition promises to better reveal the genetic alterations underlying disease, but there are distinct risks and benefits associated with different NGS testing platforms. NGS offers the potential benefit of being able to survey alterations across a wider set of genes, but analytic and clinical challenges associated with incidental findings, germ line variation, turnaround time, and limits of detection must be addressed. Additionally, transcriptome-based testing may offer several distinct benefits beyond traditional DNA-based methods. In addition to testing at disease diagnosis, research indicates potential benefits of genetic testing both prior to disease onset and at remission. In this review, we discuss the transition from the era of cytogenetics and single-gene tests to the era of NGS panels and genome-wide sequencing-highlighting both the potential and drawbacks of these novel technologies.

Scientific reports, 2018
Agrahari, Rupesh, Foroushani, Amir, Docking, T Roderick, Chang, Linda, Duns, Gerben, Hudoba, Monika, Karsan, Aly, Zare, Habil
Network analysis is the preferred approach for the detection of subtle but coordinated changes in expression of an interacting and related set of genes. We introduce a novel method based on the analyses of coexpression networks and Bayesian networks, and we use this new method to classify two types of hematological malignancies; namely, acute myeloid leukemia (AML) and myelodysplastic syndrome (MDS). Our classifier has an accuracy of 93%, a precision of 98%, and a recall of 90% on the training dataset (n = 366); which outperforms the results reported by other scholars on the same dataset. Although our training dataset consists of microarray data, our model has a remarkable performance on the RNA-Seq test dataset (n = 74, accuracy = 89%, precision = 88%, recall = 98%), which confirms that eigengenes are robust with respect to expression profiling technology. These signatures are useful in classification and correctly predicting the diagnosis. They might also provide valuable information about the underlying biology of diseases. Our network analysis approach is generalizable and can be useful for classifying other diseases based on gene expression profiles. Our previously published Pigengene package is publicly available through Bioconductor, which can be used to conveniently fit a Bayesian network to gene expression data.

Identification of miR-145 and miR-146a as mediators of the 5q- syndrome phenotype.

The Journal of experimental medicine, 2007
Leong, Kevin G, Niessen, Kyle, Kulic, Iva, Raouf, Afshin, Eaves, Connie, Pollet, Ingrid, Karsan, Aly
Aberrant expression of Jagged1 and Notch1 are associated with poor outcome in breast cancer. However, the reason that Jagged1 and/or Notch overexpression portends a poor prognosis is unknown. We identify Slug, a transcriptional repressor, as a novel Notch target and show that elevated levels of Slug correlate with increased expression of Jagged1 in various human cancers. Slug was essential for Notch-mediated repression of E-cadherin, which resulted in beta-catenin activation and resistance to anoikis. Inhibition of ligand-induced Notch signaling in xenografted Slug-positive/E-cadherin-negative breast tumors promoted apoptosis and inhibited tumor growth and metastasis. This response was associated with down-regulated Slug expression, reexpression of E-cadherin, and suppression of active beta-catenin. Our findings suggest that ligand-induced Notch activation, through the induction of Slug, promotes tumor growth and metastasis characterized by epithelial-to-mesenchymal transition and inhibition of anoikis.

Recent insights into the role of Notch signaling in tumorigenesis.

Blood, 2006
Leong, Kevin G, Karsan, Aly
Members of the Notch family of transmembrane receptors play an important role in cell fate determination. Over the past decade, a role for Notch in the pathogenesis of hematologic and solid malignancies has become apparent. Numerous cellular functions and microenvironmental cues associated with tumorigenesis are modulated by Notch signaling, including proliferation, apoptosis, adhesion, epithelial-to-mesenchymal transition, and angiogenesis. It is becoming increasingly evident that Notch signaling can be both oncogenic and tumor suppressive. This review highlights recent findings regarding the molecular and functional aspects of Notch-mediated neoplastic transformation. In addition, cellular mechanisms that potentially explain the complex role of Notch in tumorigenesis are discussed.

About us
Canada's Michael Smith Genome Sciences Centre (GSC) at BC Cancer is an international leader in genomics, proteomics, and bioinformatics for precision medicine. By developing and deploying genome sequencing, computational and analytical technology, we are creating novel strategies to prevent and diagnose cancers and other diseases, uncovering new therapeutic targets, and helping the world realize the social and economic benefits of genome science

Learn more about how the GSC is Bringing Genomics to Life.

Why work at the GSC
As the first genome centre to be established within a cancer clinic, our story began by thinking outside of the box. From being the first in the world to sequence the SARS coronavirus during the 2003 global outbreak to publishing the first study demonstrating the use of whole-genome sequencing to influence personalized cancer treatment planning in 2010, our passion for pushing scientific frontiers continues to this day.

Our technology platforms enable the transformative science being done at the GSC, but it is our world-class team of scientists and innovators that make it happen. By joining the GSC you will become part of a diverse and dedicated group of biologists, bioinformaticians, computer scientists, computational biologists, biochemists, engineers, and clinicians. We look for people who share our core values—science, timeliness, and respect—to join us in our mission to provide genomics, bioinformatics, and proteomics technology and expertise for the benefit of human health and society.

We believe that diversity and inclusivity are essential for the advancement of human knowledge and science. We welcome all applicants and provide all employees with equal opportunity for advancement, regardless of race, colour, ancestry, place of origin, political belief, religion, marital status, family status, physical or mental disability, sex, sexual orientation, gender identity or expression, age, conviction of a criminal or summary conviction offence unrelated to their employment.

All qualified candidates are encouraged to apply; however, Canadian citizens and permanent residents will be given priority.

*Due to COVID-19 restrictions, the position would require working remotely.  This restriction would be re-evaluated upon re-contracting*

The Karsan lab team at Canada’s Michael Smith Genome Sciences Centre (GSC) is seeking a research programmer to join a Genome British Columbia software automation project. The team will be working with the Karsan lab, which is responsible for developing high-throughput, clinically accredited pipelines to analyse sequenced data from genomic assays for individualized patient management of cancer. We seek candidates with strong Python software and programming skills to automate and improve existing pipelines and potentially incorporate third-party software into the system.

The role is ideally suited for a creative individual with a strong interest in software development and testing, data analysis, and automation within a high throughput academic setting.

Please email your cover letter and resume to bcgscjobs@bcgsc.ca

Please note that this position will remain posted until filled.