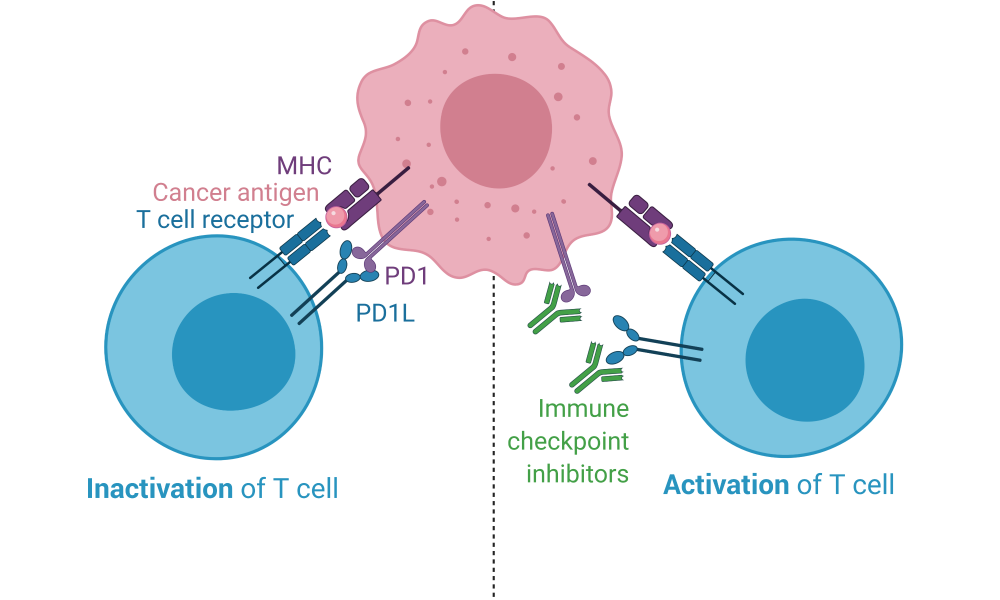 The development of immune checkpoint inhibitors (ICI), a type of cancer therapy that helps the immune system fight tumours, was one of the most significant milestones in cancer treatment in the last decade. While ICI therapy has been used to treat different cancer types, it is not universally effective and relapsed disease occurs. A robust strategy for predicting which patients are likely to respond to ICIs is needed, enabling clinicians to select the best course of treatment for each patient.

The study is part of the Personalized OncoGenomics (POG) program at BC Cancer led by Drs. Marra and Laskin. Together, they lead an interdisciplinary team of scientists, oncologists, pathologists, medical geneticists, interventional radiologists and surgeons to revolutionize our understanding of the use of genomics to inform cancer treatment planning.

The program has enrolled more than 1,000 individuals to date, and conducts intensive and integrative analyses of genomic, transcriptomic and clinical data to influence cancer treatment planning for individual patients while also producing an extensive dataset that can be interrogated by researchers around the world.

Tumour cells exploit this mechanism, expressing immune checkpoint proteins to avoid detection and subsequent destruction by the immune system—a system which might otherwise be a highly efficient tumour killing machine. ICIs target this immune evasion strategy, pulling the blindfold off the immune system and exposing the tumour cells for immune recognition and, ideally, elimination. They block the interactions between immune checkpoint proteins. As a result, cancer cells are unable to hide from the immune system and an immune attack against the tumour is launched.

The first ICI, an antibody called ipilimumab that blocks the immune checkpoint protein CTLA4, was authorized by the US Food and Drug Administration in 2011 for the treatment of melanoma. Treatments targeting the immune checkpoint proteins PD1 (pembrolizumab and nivolumab) and PDL1 (atezolizumab and durvalumab) were developed shortly after and have since become some of the most widely prescribed anti-cancer therapies. T cell-directed immunomodulators are now used as first or second line treatments for about 50 cancer types and are currently being tested in more than 3,000 active clinical trials. The significance of ICI development is highlighted by the 2018 Nobel Prize in Medicine, awarded to two immunologists, Drs. James Allison and Tasuku Honjo, whose research resulted in ICI development.

While ICIs have proven to be successful in many cases and across cancer types, a significant number of patients do not respond to treatment. Further, ICI therapy is not without risk—it can lead to severe side-effects. A method for predicting which patients will have success with ICI treatment would therefore help minimize the number of patients receiving them unnecessarily. Further, ICIs are costly to produce and administer. Prescribing ICIs to patients who are unlikely to benefit from them, or who might experience toxicity requiring treatment, is both a burden on the healthcare system and delays the administration of treatments that may be more effective for such patients.

“Immune checkpoint inhibitors have become part of the treatment strategy for many cancer types and in all stages of cancer, and yet we still lack robust biomarkers to tell us who may derive benefit from these agents,” says Dr. Laskin.

In their study, researchers analyzed the genomes and transcriptomes of 98 patients enrolled in the POG program, representing a diversity of cancer types, biopsy sites and treatment histories. The patients had either received ICI therapy prior to biopsy (16 patients) or were given ICIs after the biopsy had been taken (82 patients). The latter were the primary focus of the study, which aimed to identify biomarkers predictive of response to ICIs.

The researchers identified multiple biomarkers of ICI response. Tumour mutation burden, which represents the number of mutations in the genomes of cancer cells, was the strongest predictor of the length of time a patient remained on the therapy before their cancer progressed. The number of different types of immune cells (e.g., CD8+ T cells and M1 and M2 macrophages) was a better predictor of overall patient survival. The researchers found that combining multiple biomarkers provided the best predictive power, demonstrating that a whole genome and transcriptome approach, rather than testing biomarkers in isolation, leads to a more robust prediction of ICI response.

“Our analyses revealed that gene expression and genomic-based markers were both effective at predicting which patients may be most likely to respond to immune checkpoint inhibitors,” says Emma Titmuss, co-first author on the study. “We demonstrated that patients with multiple biomarkers simultaneously, such as those derived from whole genome and transcriptome analysis, had improved outcome compared to those with only a single biomarker. These findings highlight the benefit of using whole genome and transcriptome analysis in patient selection for treatment with immunotherapies. Currently biomarkers are assessed in isolation, but our results highlight the benefit of using a multifaceted approach.”

The results from this study led to the launch of CAPTIV-8, a phase II clinical trial in collaboration with Roche that will utilize whole genome and transcriptome analysis to select patients for ICI therapy.

“We have leveraged this experience to develop a predictive model that we are now actively testing in a prospective cohort of patients,” says Dr. Laskin. “In the next few years, we will use this scoring system to select patients from the POG cohort to receive treatment with the ICI atezolizumab in the CAPTIV-8 trial. The outcome of this study could have a profound impact on how to choose cancer treatments.”

The POG program, and subsequent studies, would not be possible without the participation of our patients and families, and support from the POG team. This work was supported by the BC Cancer Foundation, Genome BC, Genome Canada, the Canadian Foundation for Innovation and the BC Knowledge Development Fund.