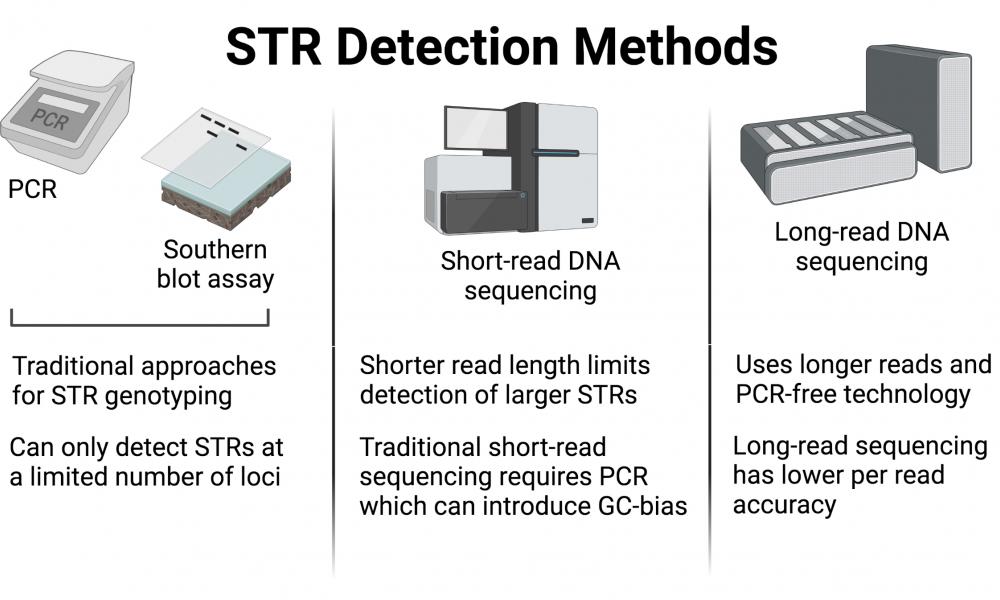 Short tandem repeats (STRs) (also referred to as “microsatellites”) are short DNA segments (individually ranging in size from two to six base pairs) that form a repeating pattern, in which multiple segments are adjacent to one another.

While typically a normal feature in a healthy human genome, an overabundance or overaccumulation of STRs has been implicated in multiple neurological disorders, including Huntington’s disease and fragile X syndrome. Such diseases are characterized by the accumulation of repeating sequences over multiple generations; a phenomenon known as tandem repeat expansion.

Incidentally, the number of repeats can be directly correlated with disease onset and heterogeneity in disease presentation, with more repeats generally indicating earlier onset and more severe disease.

All humans have STRs of variable length at specific known locations in the genome (known as loci). While this variability has previously been exploited to differentiate or genotype individuals using traditional methods such as PCR or Southern blotting, sequencing techniques promise to be more accurate and comprehensive in characterizing STRs.

“Conventional STR detection methods look for [STRs] under the proverbial lamp-posts – known loci for which they have probes. If a clinically relevant expansion occurs beyond those loci, however, these methods are totally in the dark,” says Principal Investigator, Dr. Inanç Birol.

Today, though there are multiple ways to detect STRs, each method faces its fair share of limitations (e.g., GC-bias) and require prior knowledge about their loci. Many recent studies have explored long-read sequencing technology as a better option for detecting STRs while side-stepping many of the limitations associated with previous approaches.

“Until recently, because the read lengths were short, sequencing technologies were not a good replacement for the conventional STR detection methods,” says Dr. Birol.

Published in the journal Genome Biology, researchers in the Birol Lab have developed a new software tool, Straglr, that can be used to detect tandem repeat expansions from sequencing data acquired using PCR-free, long-read sequencing technology.

“Availability of long reads, powered with an analytical tool like Straglr, will eliminate the limitations of earlier methods and will be instrumental in broadening our understanding of the links between STR expansions and various human diseases,” says Dr. Birol.

This study was supported by funding from the Canadian Institutes of Health Research (CIHR) and Genome Canada and Genome British Columbia.