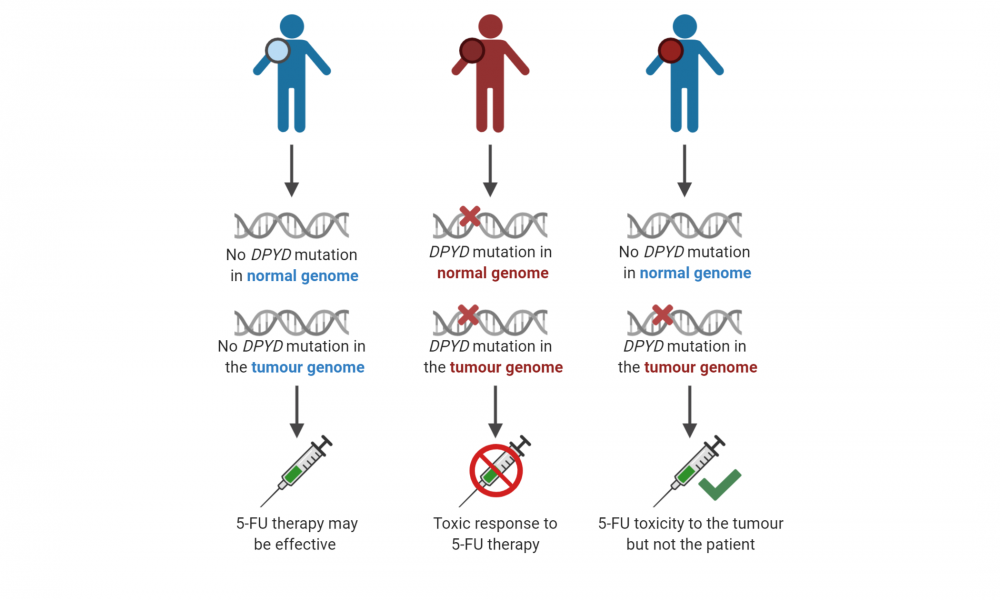 Every tumour is as unique as the patient from which it came. Everyone carries genes inherited from their parents—the “normal” or inherited genome. Mutations to the inherited genome can influence cancer development, progression and response to treatment. Cancer cells in turn develop additional mutations, with implications for the prognosis and treatment of the disease. Cancer genomics aims to decode each patient’s normal and cancer genomes to enable clinicians to determine the best course of treatment for each individual.

This is the approach taken by the Personalized OncoGenomics (POG) program at BC Cancer—led by medical oncologist Dr. Janessa Laskin and director of Canada’s Michael Smith Genome Sciences Centre (GSC) at BC Cancer Dr. Marco Marra. POG employs whole genome sequencing to analyze both the inherited and the cancer genomes of individual patients. In a new study published in Cold Spring Harbor Molecular Case Studies, the POG team has again demonstrated the power of this approach to inform personalized cancer treatment planning.

“This case really highlighted the strength of the POG program,” says Dr. Kathleen Wee, a research associate at the GSC and an author on the study, “POG is identifying new mutations that can be harnessed to target a patient’s cancer in a way that is really personalized.”

Cancer patients who have a mutation in a gene called DPYD in their normal, inherited genomes will experience dangerous toxicity when exposed to the cancer drug 5-FU; however, patients without an inherited mutation in the same gene can be safely treated with this type of chemotherapy.

In this study, which analyzed the genome of one patient enrolled in the POG program, scientists identified a DPYD mutation present in the patient’s tumour but not in their normal, inherited genome. These findings indicated that the patient could be safely treated with 5-FU without the risk of toxicity, but that the drug could act both as an anti-cancer agent while also causing toxicity to the tumour itself.

“5-FU was actually a standard therapy in this case,” says Dr. Laskin, “but it only would have been chosen as a third-line drug. After the POG findings, it was bumped up as the next therapy to try.”

A third-line treatment is given when both an initial (first-line) and subsequent treatment (second-line) treatment don’t work, or stop working. In this case, following whole genome sequencing, clinicians realized that a drug normally reserved for later stage treatment could be immediately effective, and was applied to the patient as a second-line treatment.

This reveals the importance of screening patients early for DPYD mutations not only in their normal genomes to prevent toxicity, but also within their tumours to identify patients that are ideal candidates for 5-FU therapy.

The value of whole genome sequencing

This study demonstrates the immense potential of integrating whole genome sequencing into cancer treatment planning. Standard genetic testing, which involves sequencing only a subset of genes within a tumour, would not have detected the DPYD mutation. Whole genome sequencing allowed for the identification of a mutation that could be exploited, allowing the team to prioritize treatment with 5-FU over other treatment strategies.

“Standard genetic testing would not have picked up this mutation of interest and we would not have been able to recommend 5-FU as a therapy,” says Dr. Wee, “Whole genome sequencing was key.”

To date, the POG program has enrolled over 1,200 patients and continues to employ whole genome sequencing to change the outcomes for cancer patients in BC.