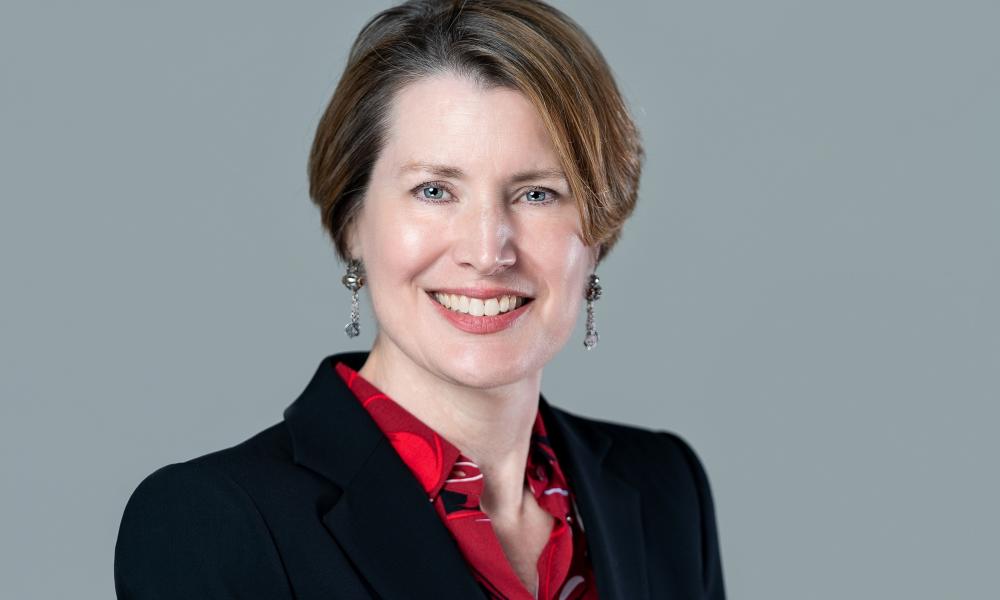 Dr. Marianne Sadar is not one to back down from a challenge. So even when told it wasn’t possible, she did something no one else dared to try.

Following her undergraduate training in biochemistry, Dr. Sadar began her scientific journey working Fisheries and Oceans Canada. She went on to complete her PhD with the intention of pursuing a career tackling environmental contaminants. But she also wanted to try her hand at health research, so she applied to BC Cancer where she was hired as a post-doctoral fellow to study prostate cancer.

“I still remember the day I was hired at BC Cancer,” says Dr. Sadar, Distinguished Scientist at Canada’s Michael smith Genome Sciences Centre (GSC) at BC Cancer. “It was the summer of 1995. I was walking down Broadway thinking I was the luckiest person in the world. I worked on fish. Yet, somehow, they saw that I could contribute to human health. I am very grateful they gave me a shot.”

Then, a discovery made over the next couple of years would propel her career in an entirely new direction, leading to fascinating findings in prostate cancer research as recently reviewed in the journal Expert Opinion on Drug Discovery. And while she thought she had left marine life behind, it would soon bring her full circle. 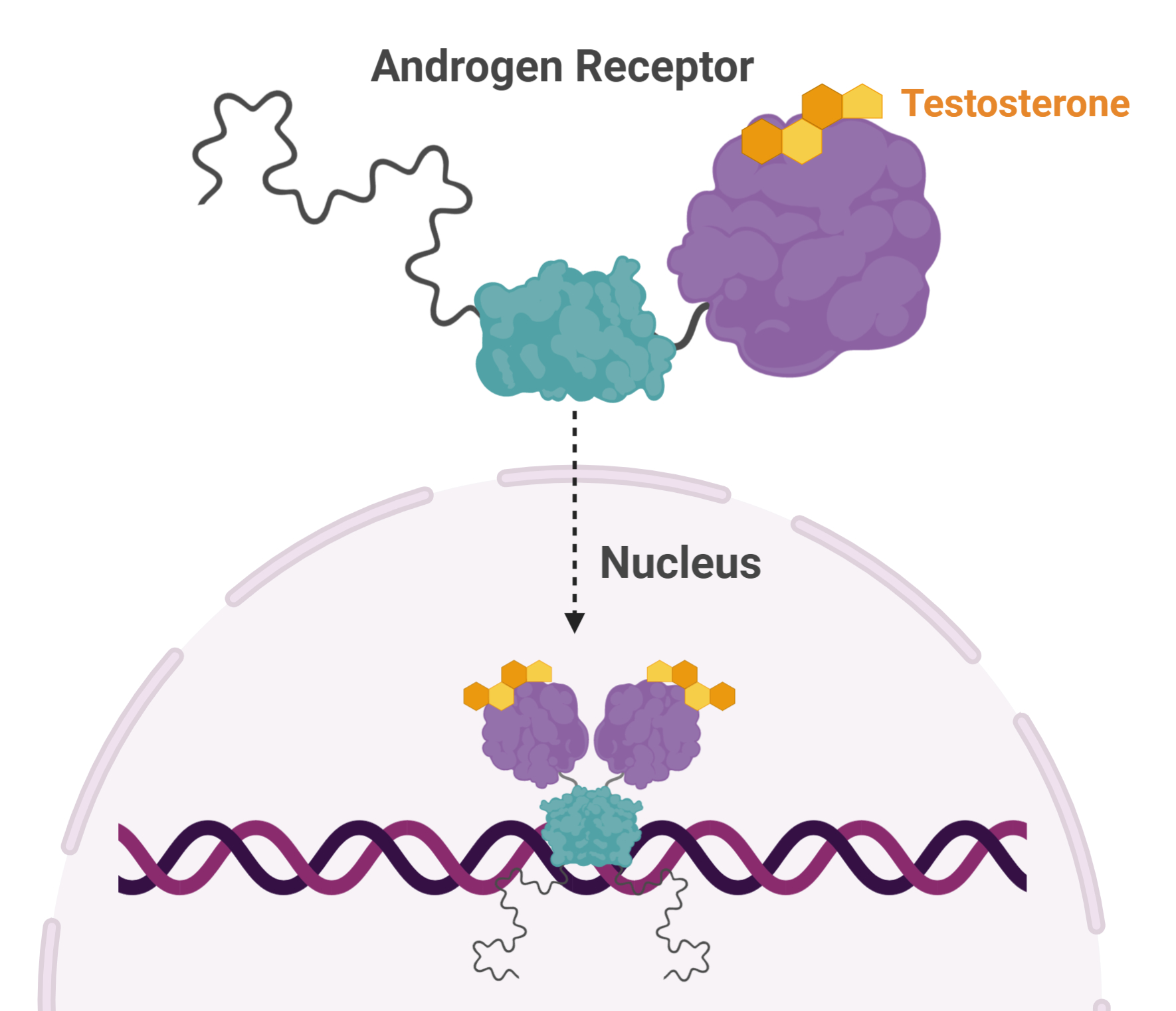 Dr. Sadar noticed something peculiar about a protein—called Androgen Receptor—and its involvement in prostate cancer. Androgen Receptor (AR) is activated by testosterone. Activated ARs pair up and move to the nucleus where they turn on and off a host of genes, affecting cellular function and replication. AR plays a pivotal role in prostate cancer and many treatment strategies target this protein.

One way to reduce the effects of AR gone rogue is to prevent its interaction with testosterone. This can be done using drugs that block testosterone from activating AR. Another strategy is to eliminate testosterone at the source, through castration.

Unfortunately, some men that undergo this procedure develop a disease known as castration-resistant prostate cancer. In some of these extremely difficult to treat 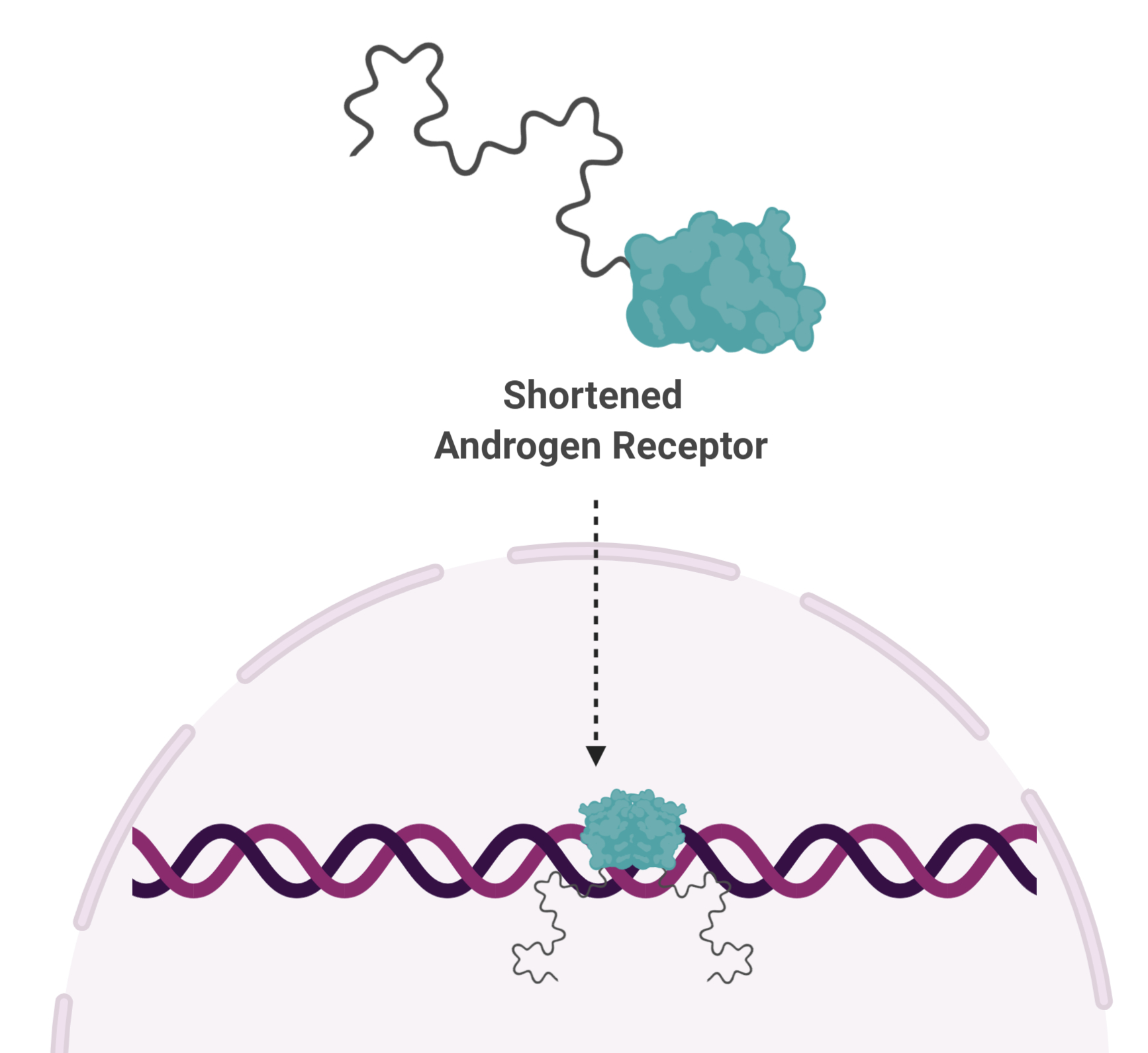 cases, AR is cut in half. And it turns out, the shortened version functions independent of testosterone, rendering testosterone-blocking drugs, as well as castration, useless.

“In advanced prostate cancer, the AR is truncated,” says Dr. Sadar. “So now you have an AR that is always active, always turning on genes. All of the therapies being given to these patients are targeting a part of the protein that isn’t even there.”

Shortened AR is missing the part of the protein that binds to testosterone, but does have the remaining two parts—the part that binds DNA, and a spaghetti-like part that is the engine needed to turn genes on. The DNA-binding portion is too similar to proteins that are vitally important for normal cellular functions and does not make a good drug target. That leaves the spaghetti-like part, known as a disordered protein.

To date, all protein-targeting drugs used clinically bind to folded proteins—those with a consistent shape and predictable molecular interactions. Scientists can strategically design drugs that will perfectly fit the shape of a folded protein. But disordered proteins are far from predictable. They are constantly changing shape, making them impossible drug targets. Or so cancer scientists had thought.

Determined to find a solution for prostate cancer patients who had exhausted all other treatment options, Dr. Sadar embarked on a path that had not yet been travelled, aiming to develop the first drug against a disordered protein to be tested in clinical trials.

“I have spent my entire career being told I can’t do it, and that it won’t work,” says Dr. Sadar. “I remember getting a reviewer comment saying that I should re-think my career. That only made me more driven!”

To find unique compounds that may bind the disordered protein, Dr. Sadar returned to the ocean. The marine environment represents a largely unexplored biosphere rich in previously unidentified compounds. Scouring the oceans for potential medicines has proven successful, leading to treatments for a wide range of diseases.

“You can buy packages of potential drugs that really smart chemists design. But many of the chemicals found in marine organisms would never be found in these packages,” says Dr. Sadar. 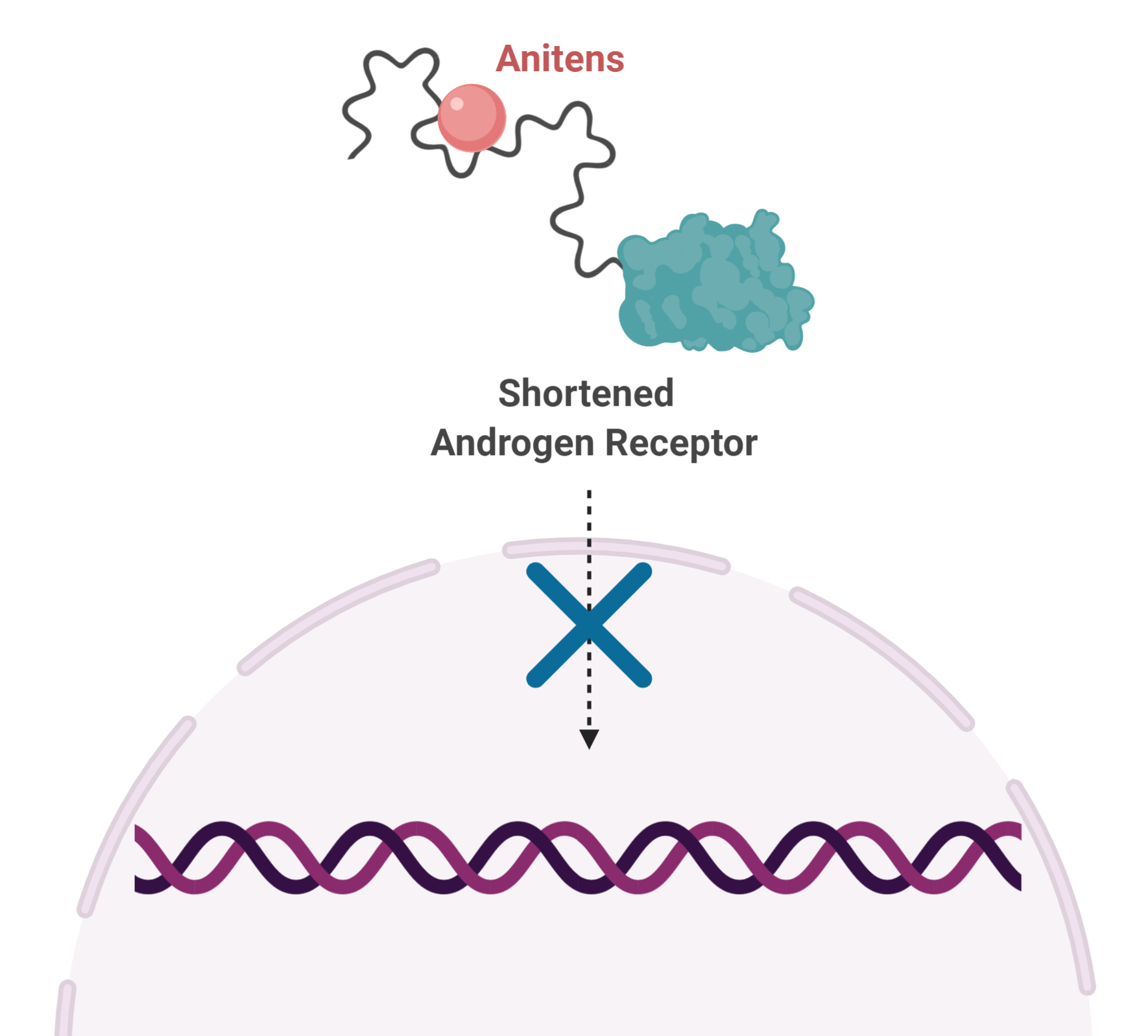 Through a long-standing and fruitful collaboration with Dr. Raymond Andersen at the University of British Columbia, Dr. Sadar’s team began exploring compounds isolated from marine sponges. After years of labour-intensive interrogation of thousands of compounds, they found one that would become the first drug that binds directly to a disordered protein to be  tested in clinical trials.

This finding gave rise to an entirely new class of drug, called Anitens, which bind to the disordered region of AR and prevent its function. When used in the laboratory, Anitens stop the growth of prostate cancer cells, including those with shortened AR.

In 2009, Dr. Sadar founded ESSA Pharma Inc. to further develop the drug. Only one in every 1,000 drugs that show promise in the laboratory make it to clinical trials, and in 2015, Ralaniten became one of them. The international clinical trial, co-led by BC Cancer Medical Oncologist Dr. Kim Chi, tested the drug for advanced stage prostate cancer. The results were bittersweet.

“These were patients who would normally burn through treatments in a couple of months before you need to put them on something else,” says Dr. Sadar, “some of the patients in this trial survived on the drug for more than a year.”

While the drug looked promising, it did not cure the patients in the trial. But Dr. Sadar’s team now knows why. The drug was quickly being eliminated from the patients’ bodies, meaning that in between doses, there was very little drug left in their systems.

Scientists at ESSA Pharma are now working hard to modify Ralaniten, optimizing it to remain in patients’ systems longer. New formulations are ready to go into clinical trials later this year.

“The entire focus of the company has been to ensure that the drug is stable and not metabolized quickly,” says Dr. Sadar. “They have done a lot of work to try to make sure that the blood levels stay very high throughout the dosing period.”

Science is an iterative process, each new discovery building upon the findings of others. But sometimes, a scientist needs to be the first.

“It is really tough, not having previous work to build off of,” says Dr. Sadar. “We had to figure everything out for ourselves. And that takes a lot of time, dedication and hard work. I am so fortunate to have worked among so many who have pursued in the face of these challenges. I am grateful for collaborators like Dr. Andersen, who consistently kept up our morale when we didn’t get the success we had hoped for.”

Dr. Sadar is also grateful for the support she has received over the years from Country Meadows Senior Men’s Golf Club. Their charity event has run every year since 1999, making it the longest running event at BC Cancer Foundation, and has provided the Sadar lab with the equipment needed to do their research.

“I took on this challenge with one goal in mind,” says Dr. Sadar, “And that is to make a difference in the lives of men living with prostate cancer. I have devoted my entire career to this, and I remain very optimistic.”