Dr. Zovoilis came to the GSC to advance his knowledge in bioinformatics. Now an Assistant Professor of Bioinformatics and Director of the Southern Alberta Genome Sciences Centre, he is applying what he learned to study the role of “junk” RNA in aging-associated illnesses. He is one of 16 speakers that will present at the GSC’s 20th Anniversary Symposium, November 21, 2019. 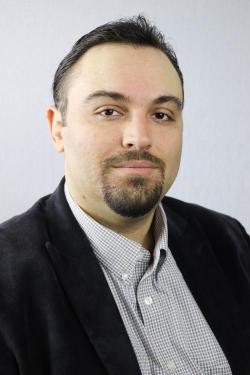 It became apparent to Dr. Athan Zovoilis during his medical residency and doctorate in human genetics that bioinformatics tools for the analysis of high-throughput sequencing data were imperative for advancing genomics research and his career.

“It was both out of interest and necessity that I set out to gain a strong background in bioinformatics,” says Dr. Zovoilis, “And I wanted to go the best place in the world to get it.”

After completing his doctorate at the University of Goettingen in Germany and a post-graduate training in Bioinformatics at the University of Manchester in the UK, Dr. Zovoilis joined the GSC, working under the supervision of Dr. Steve Jones. He was awarded a European Fellowship, rarely given to researchers studying abroad, and credits the GSC’s reputation as one of the top institutions in the world for being selected.

“My fellowship was indicative of how highly the GSC was regarded on the world stage,” says Dr. Zovoilis, “And my experience at the GSC was scientifically one of the most intellectually fertile periods in my training.”

Dr. Zovoilis took what he had learned at the GSC to Harvard University where he conducted highly impactful research revealing connections between non-coding regions of the genome and cancer, publishing his findings in journals including Cell. His outstanding scientific accomplishments resulted in him being selected as a Tier II Canada Research Chair in RNA Bioinformatics and Genomics at the University of Lethbridge (U of L) in Alberta, where he is now an Assistant Professor of Bioinformatics. There, his aim is to establish a research program aimed at developing personalized medicine for patients with cancer and dementia.

His research focus is on the function non-coding RNA in the pathogenesis of aging-associated diseases including dementia and cancer, and also in cellular stress responses. As one of the first institutions in Canada to obtain an Oxford Nanopore PromethION sequencer, his laboratory employs the latest technologies to accomplish his research goals.

Dr. Zovoilis is also the Director of the recently established Southern Alberta Genome Sciences Centre at U of L, which has used the GSC as a template and aims to bring personalized medicine for patients with cancer and dementia to Alberta. He is the Academic Lead of the Alberta Bioinformatics Network and is a Principal Investigator at the Alberta RNA Research and Training Institute and at the Canadian Centre for Behavioural Neuroscience.

“The GSC serves as an example throughout the country for creating similar genome centres,” says Dr. Zovoilis, “It is no secret that our new genome centre used the very successful story of the GSC as a template.”

At the GSC’s upcoming 20th anniversary symposium, Dr. Zovoilis will present his recent research on a class of non-coding RNAs, which were up until recently regarded transcriptomic “junk”, and their significant role in aging-associated diseases. Dr. Zovoilis feels honored to be selected as a speaker at the symposium and is looking forward to meeting with former colleagues and mentors, to hearing about their science and to learning more about how scientists in other provinces can integrate with the GSC to bring genomics to Canadians across the country.